Juliette hasn't touched anyone in exactly 264 days. The last time she did, it was an accident, but The Reestablishment locked her up for murder. No one knows why Juliette's touch is fatal. As long as she doesn't hurt anyone else, no one really cares. The world is too busy crumbling to pieces to pay attention to a 17-year-old-girl. Diseases are destroying the population, food is hard to find, birds don't fly anymore, and the clouds are the wrong color.
The Reestablishment said their way was the only way to fix things, so they threw Juliette in a cell. Now so many people are dead that the survivors are whispering war- and The Reestablishment has changed its mind. Maybe Juliette is more than a tortured soul stuffed into a poisonous body. Maybe she's exactly what they need right now. Juliette     has to make a choice: Be a weapon. Or be a warrior.
Warum? Ich habe keine ahnung warum ich schon vor dem Erscheinen hin und weg von dem Buch bin. Vielleicht liegt es daran, dass ich momentan furchtbar gerne distopische Romane lese ? oder einfach an dem coolen Trailer zum Buch ?? 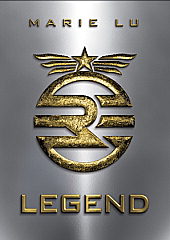 What was once the western United States is now home to the Republic, a nation perpetually at war with its neighbors. Born into an elite family in one of the Republic's wealthiest districts, fifteen-year-old June is a prodigy being groomed for success in the Republic's highest military circles. Born into the slums, fifteen-year-old Day is the country's most wanted criminal. But his motives may not be as malicious as they seem.

From very different worlds, June and Day have no reason to cross paths - until the day June's brother, Metias, is murdered and Day becomes the prime suspect. Caught in the ultimate game of cat and mouse, Day is in a race for his family's survival, while June seeks to avenge Metias's death. But in a shocking turn of events, the two uncover the truth of what has really brought them together, and the sinister lengths their country will go to keep its secrets.
Warum ? Ich hoffe sooo sehr, dass "Legend" an die Qualität von "Divergent" oder "die Tribute von Panem" anknüpfen kann &nd ganz ehrlich ? Die Filmrechte für das Buch wurden schon verkauft, das verspricht doch Einiges oder ?
Eingestellt von Christina um 07:51

The Duke and I - Julia Quinn